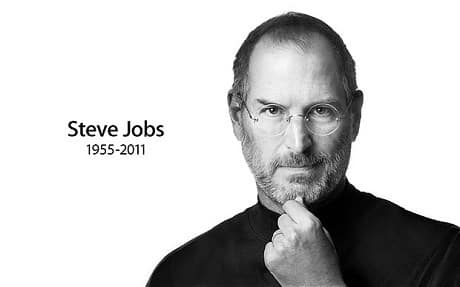 I looked down at my iPhone and saw “RIP Steve Jobs” trending on Twitter. I was stunned.  “Countless people are learning Steve Jobs died on devices that would not exist without his vision. That’s a legacy,” tweeted @grandmofhelsing. I couldn’t agree more. For me it was even more poignant, as I was only on Twitter because of Apple. Even as an Internet marketer, I was dragging my feet on starting a personal Twitter account until Apple announced it would be integrated in the new iOS 5. Sold! I am an Apple fangirl, hook, line and sinker, so the news of Steve Jobs’ death, although not shocking, was personally devastating.

I hadn’t always been an Apple lover. I grew up using Windows and really had no complaints. It wasn’t until I was in my twenties that I even used a Mac for the first time. I had graduated from college and was in the market for a new computer. Being a conscientious consumer I researched heavily, visiting the Apple store and then Best Buy. I was leaning towards a MacBook Pro, but wanted to give the PC options one more look. I walked up to the nearest Best Buy employee. “I am ready to buy a laptop, but I can’t decide between PC or Mac.” He looked at me and said, “If you are even considering a Mac, get one. You won’t regret it.” I left and drove straight to the Apple store. Thirty minutes later, I walked out the door with my new MacBook Pro while every employee in the store literally applauded.

The Best Buy employee was right. Not only have I never regretted that decision, but it has influenced every other electronics purchase I have made since.  Steve Jobs demonstrated the power of relationship branding – that relationship between a buyer and a brand that is built on trust, common values and the fulfillment of promises. I can vividly remember my university professor explaining this concept in class and using Apple as her example. The promise Steve Jobs made was to simplify your life. Think of all of the things you can replace with your iPhone: Camera, watch, calendar, landline, iPod, address book, calculator, GPS, notebook…the list goes on. This simplification is evident even in Jobs’ minimalistic marketing style. While most companies advertise with big bold designs and eye catching colors, everything about Apple’s marketing is simple and understated: A white box with a silver apple on it; a white store with a glass front and several tables displaying their products.  Love it or hate it, you probably have a relationship with Apple.  Personally, I iMessage on my iPhone, read iBooks on my iPad, iChat on my MacBook Pro, run with my iPod, and store most of my life on iCloud. In short, iLove Apple!

Steve Jobs also contributed to the redefinition of the public CEO. Think about it: Would you recognize Bill Gates on the street? Do you know the name of Google’s CEO?  For me those answers are “no”, but I think of Steve Jobs fondly in his black turtleneck and jeans standing in front of a huge black screen speaking passionately about his vision.

Of course, not everyone is as sold out as I. It is probably better that way! The fact remains, whether you use Apple products or not, we all reap the benefits of Steve Job’s outside-the-box-thinking. Paul Saffo, director of Institute for the Future put it this way, “The people that have the most to celebrate are Windows users! But for Apple bringing out the Macintosh and demonstrating the [Windows] interface and the mouse, we would all be stuck with a C: prompt.”

How about the Walkman and the Discman, the iPod’s mobile-music ancestors? Do you remember stepping carefully over cracks in the sidewalk to keep your CD from skipping? How about rewinding the tape in a cassette with the eraser end of a pencil after your Walkman ate it? Even these, though millions sold, never impacted culture or human behavior quite the way the iPod has. Thank you, Steve Jobs.

Another example: I’ll bet you don’t own a beige computer. Computers today come in all colors, shapes and sizes and there are even fancy covers and cases you to personalize them further. Before the iMac, beige was the only option! In their 1999 iMac commercial Apple asked, “Have the people who have made computers before never done anything but beige? That’s nuts! Have they been in thinking jail?”

Microsoft’s upcoming Windows 8 OS is an example of Jobs improved even the competition; it reportedly closely follows Apple’s controversial shift toward monochromatic, high contrast icons. Microsoft also announced on September 14th that they will be releasing an app store called “The Windows Store” to compete with Apple’s App Store.  Steve Jobs broke the tech world out of “thinking jail” for decades, propelling quality products, competition and new ideas in the market place.

In his lifetime, Steve Jobs revolutionized the industries of personal computers, music players, phones and tablets driving them to new places others had only imagined. His final contribution was to redefine artificial intelligence and bring it from a concept in sci-fi movie into your pocket.  Apple’s new personal assistant, named Siri, lets you use your voice to send messages, schedule meetings, place phone calls, check the weather and more just by talking to it. It understands what you say, knows what you mean, and even talks back.  It honestly reminds me of HAL 9000 from the Space Odyssey saga… only user-friendly!

Siri debuted last week with the release of the iPhone 4S and commemorates the legacy of Steve Jobs, both conceptually and literally. If you ask her “What’s the best phone?” she will answer “Wait…There are other phones?” I couldn’t have said it better.